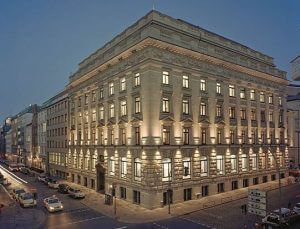 The first jail sentence has been pronounced in the Cum/Ex tax fraud. It is causing frights in board rooms and trading floors.

The first jail sentence for Cum/Ex

The accused is the 77 yo general agent of MM Warburg in Hamburg, one of Germany’s oldest private bank.

Christian S. (his name cannot be disclosed) had to answer to an 283-page indictment from the Cologne prosecutor, which took 2.5 hours to read. He didn’t speak much after this.

Christian S. is considered the bank’s most important decision-maker in the harmful business:

“During the entire period of the crime, the accused occupied the interface between the retailers and the bank’s management level as a general representative, as head of the balance sheet, accounting and controlling department and as the ‘right hand’ of the management level.”

The firm, which collected €325m of tax credit through 13 different operations, alleged in its defense that the Bonn court had no jurisdiction, that their client was too frail to attend and is innocent.

It is already appealing to suspend the judgment and the payment of the fine.

The financial and political dimensions

Web24 News explained the financial and political dimension of the Warburg case in its April 2020 article:

MM Warburg is one of the oldest and one of the last German private banks. Founded by the Warburg family in 1798, it survived both wars and Nazi persecution. It crafted a reputation based on discretion and respectability.

Christian S. is and the right-hand of the Christian Olearius, the firm’s manager and co-owner, who is prosecuted separately. Olearius maintained direct contact with Christian S. on the subject. He also maintained a personal relationship with Hanno Berger, the Frankfurt tax lawyer considered one of the main initiators of the Cum/Ex scandal. Berger pitched the trade directly to Olearius as early as 2008 and is prosecuted separately.

As the Cum/Ex scandal unfolded, Christian Olearius and Max Warburg, the two managers and co-owners of the bank, became personally subject to a ‘fit and proper’ examination by the banking supervisory authority BaFin. In November 2019, they resigned instead of waiting for the conclusion of the review. The story doesn’t say how the firm’s capital would have been impacted during this separation, but the firm had potentially €300m of fines and disgorgements against a capital of only €275 m…

The firm offered to payback all its Cum/Ex profits. The operations generated a tax volume of €169 m, of which €68 m of tax credit were collected, and €46m of profits retained. The court had a different view. It calculated the damages to the state by MM Warburg Co at €176 m, but a subsidiary had another €109m in the game. Experts also argued that when there is fraud, what counts is the revenues, not the profits.

MM Warburg felt safe in Hamburg, where tax authorities were not keen on prosecuting such tax cases. There are rumors that the authorities asked Max Warburg to relinquish its position as Hamburg’s mayor as outcome of the scandal. But things have changed. Bonn pursued and made its case in court. The Hamburg tax authorities are now reclaiming €160 m.

MM Warburg is of course claiming its innocence. It is now accusing Deutsche Bank, the custodian, because Deutsche should have known better and should have withheld the tax refunds. Considering that two London bankers cooperated with the prosecutors in the Warburg case (saving themselves some time in jail) and the recent judgement, I wouldn’t put too much credence to this version.

Meanwhile, the Wiesbaden court is hearing the case of HVB (now UniCredit). The Frankfurt court is holding the case of Maple Bank. There are over 1,000 suspects across Germany being investigated for Cum/Ex. The flood of Cum/Ex case is so large, that the Bonn Regional Court has expanded its staff and opened a  new criminal chamber…

Now that the first white collar criminals are going to jail, many accused traders and board members really start to feel the sweat dripping down their back…

The Turkish Lira is free falling. It has been weakening for years (from parity to 12 TRY to the dollar), but the 15% fall on Tuesday is causing a lot of pain and concerns. It could be intentional.

END_OF_DOCUMENT_TOKEN_TO_BE_REPLACED

The Rise of Money Launderers on Snapchat and Instagram

An interesting British documentary about how money mules are recruited by larger money launderers, and how easy it is to lure young people into crime for a few grands.

END_OF_DOCUMENT_TOKEN_TO_BE_REPLACED

This is not good. If you wanted a trigger for a recession, this could be it.
Standard & Poor’s says that Evergrande will default – it cannot sell new constructions.